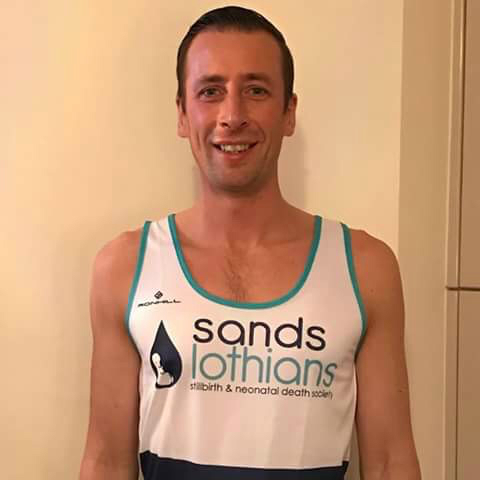 Paul Brown, a local community hero from West Lothian, has set his biggest and most gruelling fundraising challenge yet – running 500 miles in 5 weeks for local charity, SANDS Lothians.

Paul will be running every day of the week, morning and night for 5 weeks. His challenge will culminate in completing the 5k, 10k, half and full marathon at the Edinburgh Marathon Festival. All money raised will support the vital work of SANDS Lothians, a charity that looks after families whose baby has died in Edinburgh and the Lothians.

Paul is well known for his amazing fundraising efforts, having raised £5,500 for various charities and local groups by taking part in over 10 marathons, including the Seven in Seven Days challenge in 2016, three ultra-marathons, swims and an Ironman event. For all his fundraising last year, he has recently been voted the “West Lothian Courier and The Centre Local Hero”. When he is not running, Paul works as Commercial Insurance Broker and in his spare time, is a personal trainer to help people who are looking to get in shape.

The ‘500 miles for SANDS’ challenge will start in the last week of April and end at the marathon finish line at the Edinburgh Marathon Festival on Sunday 28th May. If you would like to support him, you can do this on his JustGiving page.

In 2016, Paul was first motivated to support SANDS Lothians, alongside other local charities and groups, when he completed the Seven in Seven Days marathon challenge. Although not having direct experience of baby loss, throughout the year he had continued to be moved by the stories of the families the charity support. He was especially touched by Nicky Reynolds’ story of her beautiful baby boy, Ramsay. Ramsay was tragically born sleeping on the 12th February 2015, because of complications with blood vessels in the umbilical cord, a condition called ’Vasa Praevia’. SANDS Lothians supported Nicky and she kindly shared her story and pictures of her precious Ramsay, which inspired Paul to create this new challenge for 2017.

Paul said, “I want the families supported by SANDS Lothians to know that although I am not someone that has been through what they have – I have been touched by the things that I have read and the photos I have seen. So, I thought why not challenge myself and raise money for a good cause – even if it means getting a few blisters, it’s worth it.” Nicky Reynolds, Ramsay’s mother explained, “The physically demanding challenges Paul has completed in the past, and the one he is now undertaking on behalf of Sands Lothians, are all amazing feats by anyone’s standards. What makes it even more special, is the fact that Paul has been so touched by the stories of our precious babies – in particular my beloved baby boy Ramsay. It brings some small comfort, that through death, my little boy can make a difference to other bereaved families, and help raise awareness of the wonderful work Sands Lothians does Work that is utterly priceless, but also vital in providing initial and ongoing support to families facing their worst nightmare.”

Nicola Welsh, SANDS Lothians’ Chief Executive stated, “We are thrilled that Paul has decided to support us again this year with such an awe-inspiring challenge. We have been touched by his passion and determination to raise money and awareness for the families that we support. Paul will always be our hero and we look forward to celebrating his 500th mile at the finish line of the Edinburgh Marathon Festival!”

The Edinburgh Marathon Festival is the biggest sports event of the year for SANDS Lothians and they still need a few more runners to get involved. Email [email protected] for more information. For further information: Angie Alexander, Fundraising Manager 0131 622 6263 / [email protected]