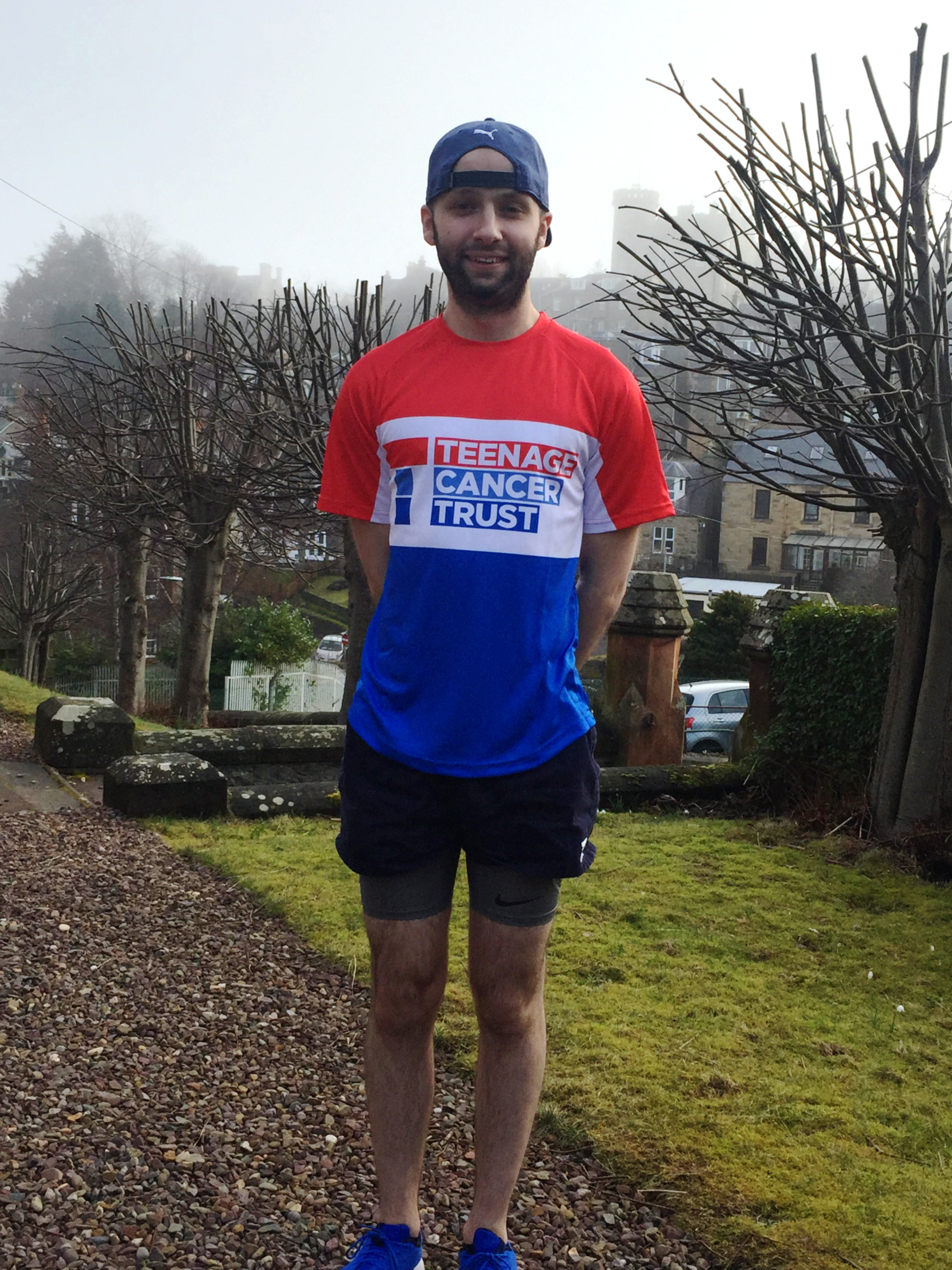 06 March, 2018
HAMISH ROBINSON, 22, from Selkirk, is getting set to take on the Edinburgh Half Marathon on Sunday 27th May, just 16 months after being diagnosed cancer.

The 22-year-old is determined to give back to the charity Teenage Cancer Trust after the support he received through being diagnosed with a cancerous brain tumour in January 2017, at the age of just 21.

Hamish started feeling ill in January 2017 and rapidly went downhill with a minor headache which quickly got worse.

Hamish said, “My co-ordination was going, I started to lose my balance and I had double vision, and ringing in my ears. I was struggling to eat or walk. My mum recognised that something wasn’t right and encouraged me to go back to the doctors three days later. The doctor had an idea of what it might be and said she wasn’t going to send me away without a scan.

He was transferred to the Western General Hospital in Edinburgh where he underwent an MRI scan which revealed a brain tumour the size of a pool ball.

“I was in that much pain that they inserted a ventricle access device into my head to remove brain fluid and release the pressure on my brain. Tests on this fluid showed tumour markers, substances secreted by cancerous cells, of >4000, with <2 being normal”

“I was shown a picture of it and I couldn’t believe that it was in my head, or that this was happening to me. I was only 21. The type of tumour I had was very rare, I was one of 10 people in Europe aged 16-24 with it.”

Hamish was then referred to the Teenage Cancer Trust unit where he began his chemotherapy treatment.

“After three rounds of chemo, I was told I may need further surgery to take some of the tumour out. I was told the surgery could cause paralysis and brain damage but also that by having it I was more likely to make a full recovery so I made the difficult decision to go for it.

“I had another round of chemo, then six weeks of radiotherapy. I felt more tired and nauseous as it went on but I finished my treatment and got through it.

Hamish praised the work of the staff on the unit, saying: “The nurses were incredible throughout my treatment and were one of the best things about being on the Teenage Cancer Trust unit. They were chatty, funny and reassuring. The surgeons were amazing too.”

Hamish has now finished his treatment and is preparing to take on the Edinburgh Half Marathon on Sunday 27th May to raise funds for Teenage Cancer Trust.

“I decided I wanted to do the Edinburgh Half Marathon to raise money for Teenage Cancer Trust after the amazing treatment I received.

“I’d always took part in a lot of sport but I haven’t done a long distance run before so I gradually increased my distance using a training plan. There are a few young people from the unit running so I may be able to do the course with one of them.”

You can support Hamish by donating to his JustGiving page here: https://www.justgiving.com/fundraising/hamish-robinson, or if you’d like to join Hamish on the start line, you can sign up to run in the Edinburgh Marathon Festival for Teenage Cancer Trust today. For more information, visit https://www.edinburghmarathon.com/charity/affiliates/?charities_id=932.