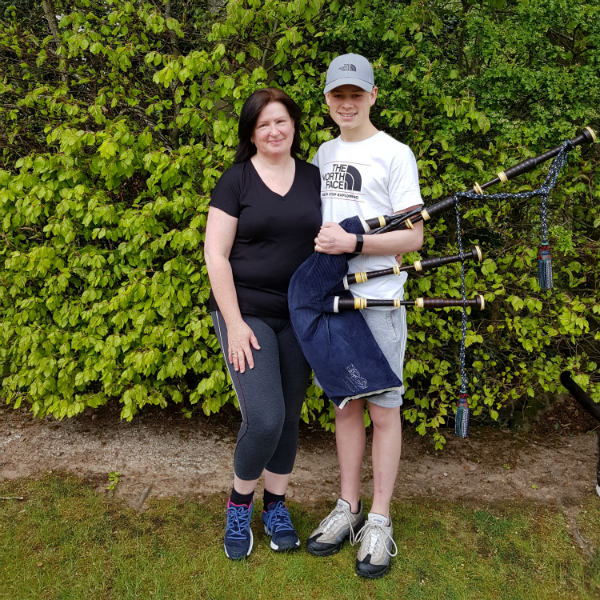 MORNA O’MAY is running the Edinburgh Marathon Festival 5K on Saturday 25th May to raise money for the Eilidh MacLeod Memorial Trust. The trust was set up in 2017 after the tragic loss of fourteen-year-old Eilidh at the Manchester Arena.

Eilidh was a typical 14-year-old growing up in a small tight-knit community on the Isle of Barra in Scotland’s Outer Hebrides.

A major part of Eilidh’s life was her love of music. She was a huge fan of American singer Ariana Grande – the artist she went to see at Manchester Arena where she sadly died along with 21 others in the attack on the venue.

Morna will be taking part in the EMF 5K alongside her son Murray who will be piping her along the route.

Morna said “I may not be a runner but I believe that music education for young people is so important so, as supporters of this charity, I will run and Murray will pipe the 5K route. Murray was born the same year as Eilidh which is why we feel such an affinity to this charity.”

When at home, Eilidh was a keen bagpiper and was developing into a talented musician. She played in the local pipe band, often travelling and competing with them. The band was an enjoyable social activity for her. Making music was something very special for Eilidh.

“Murray will be alongside me with his bagpipes for the duration of the run. We feel that this is a fitting tribute for such a wonderful young lady who was a keen bagpiper and loved being part of her local pipe band.” Morna said

The two main aims of the Eilidh MacLeod Memorial Trust are to establish and maintain a permanent memorial to Eilidh on her home island of Barra which encapsulates her talents, innocence and joyful spirit; and to enable young people and children to continue Eilidh’s musical journey by providing support to advance their music education (primarily but not exclusively in rural areas)

The memorial will not only remember Eilidh, it will also provide a peaceful space for quiet reflection and remembrance of all loved ones.

Her family are also eager to enable others to continue the musical journey that Eilidh had only just embarked on. The Trust will support young people and children to advance their musical ambitions by providing access to music activities including tuition and performance opportunities. It will offer budding musicians the chance to explore their talents through high quality and affordable music making provisions within their local communities.

If you’d like to support Morna in her fundraising efforts, you can do so here – https://www.justgiving.com/fundraising/morna-o-may

Entries are still available for the Edinburgh Marathon Festival on Saturday 25th and Sunday 26th May. Entries are filling up fast, with the marathon, junior 2K, 1.5K & Kids Kilo events already sold out – remaining events are expected to reach capacity.