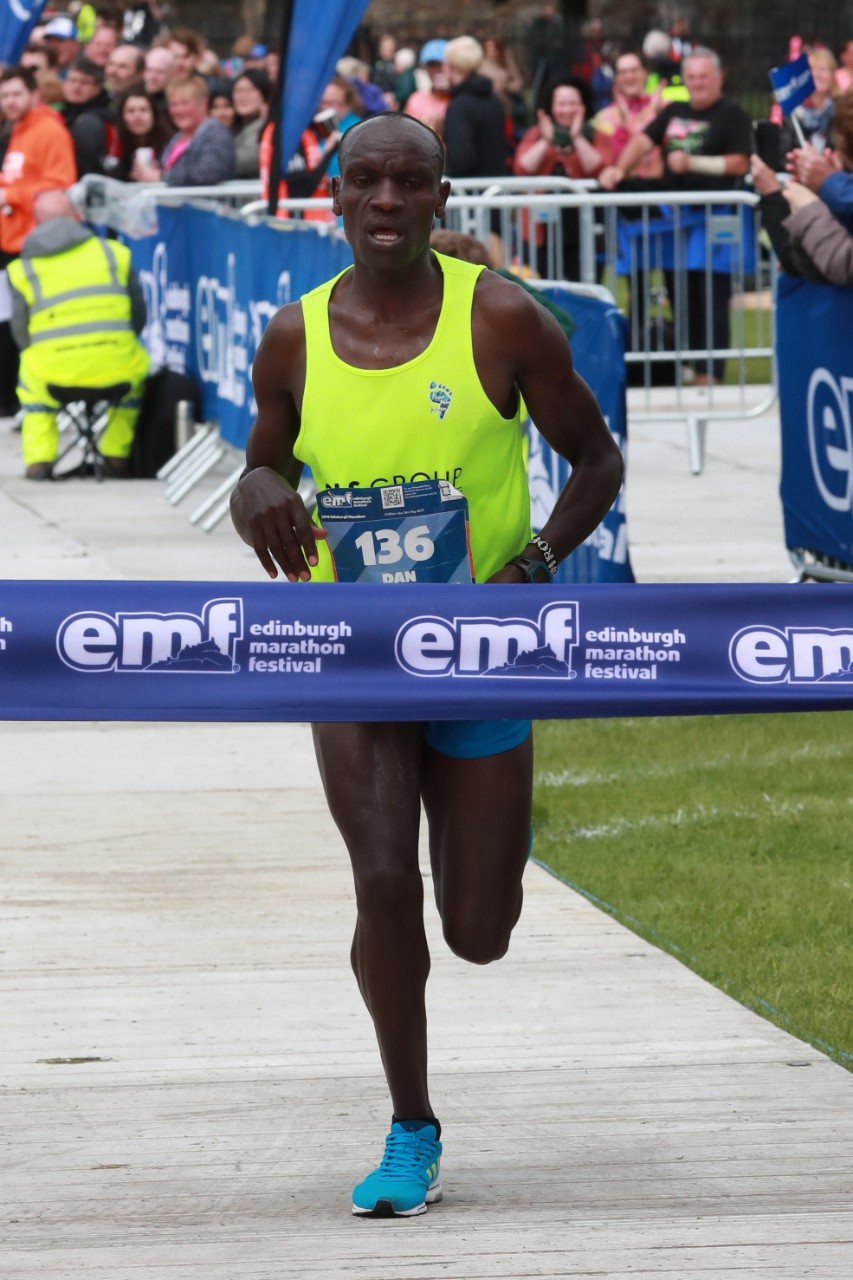 Sunday’s drizzly weather made for challenging running conditions on one of the world’s fastest marathon courses, where for the second year running, the Edinburgh Marathon Festival collaborated with not-for-profit organisation ‘Project Africa Athletics’ to welcome talented, developing athletes that may not otherwise get the opportunity to take part in a race with the status of the Edinburgh Marathon.

Kenya’s Dan Tanui raced to glory with a winning time of 2 hours 30 minutes and 13 seconds.

“The course is good and there was lots of support and cheering along the way, I found the wind challenging today, I’m hoping to come back next year to retain my title.”

The women’s race was dominated by Winchester’s Melanie Wilkins who lead from the front with a time of 2 hours 42 minutes and 56 seconds.

“This is my first time in Edinburgh and I’m very happy to win!”

Conquering 26.2 miles isn’t tough enough for some, Jeremy Hill from Edinburgh completed a ‘hairy’ – the collective name used to describe the grand slam of running a marathon, half marathon, 10k and 5k over the weekend. Jeremy ran for the MS Society and the MS Therapy Centre Lothian in support of his wife who has the condition.

At the finish line, a tired Jeremy said: “I’m so glad to be finished, I almost didn’t make it from the half marathon finish! I got a PB last year and just thought ’why not’ when I saw the Hairy challenge.”

Claire Dalrymple from Edinburgh crossed the Edinburgh Marathon finish line for the 17th time. This year was particularly poignant for Claire – she ran in memory of her husband Stephen for the events Official Charity Macmillan Cancer Support.

Stephen sadly passed away in February after losing his battle against Oesophageal cancer. Throughout his illness, Stephen and Claire received incredible support from the charity to ensure the precious time they had left together was spent making happy memories.

“Throughout Stephen’s illness I kept running to keep me strong and focused, it really was my therapy” explained Claire.

“I’m raising money to say thank you to Macmillan for all their help and support.” As part of her fundraising challenge Claire also completed the London Marathon in April and is looking ahead to the Harris Marathon later this year.

Karl said “It was a really great course, good conditions for running, although the last 2 miles were tough. I decided to run hard and just go for it!”

Birmingham’s Molly Browne was the winner in the women’s race with a time of 1 hour 18 minutes and 27 seconds.

Molly said: “It felt really good, the support was really good on the course. I ran in Edinburgh two years ago but today was a bit different, I’m really pleased.”

She was followed by Glasgow’s Sarah Potter in 1 hour 18 minutes and 51 seconds with Bathgate’s Jo Williams finishing in third place with a time of 1 hour 19 minutes and 26 seconds.

Edinburgh’s Holyrood Park played host to Saturday’s action with the 10k, 5k and junior races kicking off the festival’s line up.

Londoner Ewan Cameron was first home in the EMF 10K race with a winning time of 33 minutes and 17 seconds.

Commenting on his win he said “It was fantastic! I went to Edinburgh University, then after I finished university I took a 17 year hiatus from running, so it was good to be back!”

First female in the EMF 10K was West Yorkshire’s Sarah Cumber in a time of 38 minutes and 26 seconds.

Sarah said “We’re here to visit one of our friends, I’ve never raced in Scotland before. It was great! Lovely weather and the views were absolutely beautiful, everyone was so supportive.”

Catherine Meyer stole the show in the women’s 5K field as she set a new course record with a winning time of 18 minutes and 37 seconds.

The American said: “It was good! I’m studying in London for a year and my brother’s running the marathon tomorrow so my whole family are in Edinburgh and I figured I’d run the 5K the day before!”

Sixteen year old Cameron Bullen from Dunbar was the first finisher with a winning time of 17 minutes and 40 seconds.

Commenting on his win he said: “I thought it was a really well organised event, going up the hill was tough but once I got there, I stormed the downhill. I’m thinking of coming back to take on the 10K next year.”

Around 1600 youngsters took part in Saturday’s junior races, consisting of the 1.5k for 6-8 year olds and the 2k for 9-12 year olds, as well as both the Junior 5K and the Kids’ Kilometre.

The family took part  in memory of daughter and sister Edie who tragically died after a short and sudden illness in October 2015 aged only two.

Cheryl said: “Running helped us so much after Edie died and continues to. It’s a way for us to keep her memory alive”.

Their involvement in the Edinburgh Marathon Festival forms part of a wide range of fundraising activities Cheryl and Tom have undertaken over the years to raise an incredible £25,000 for Edinburgh Children’s Hospital Charity and they hope to surpass the £30,000 mark this year.

“We will continue to support this charity forever now as it holds a very special place in our hearts and is part of a beautiful legacy for Edie”.

Fourteen runners from El Salvador travelled to Edinburgh to take part in the marathon, half marathon & 10K events. They ran in tribute to one of their group, Maria Olimpia Escobar de Melhado.

Maria was stabbed on an early morning training run whilst preparing for the event, and tragically passed away on Saturday 18th May.

Oscar Edgardo Melhado, Maria’s brother-in-law said: “These are the risks that our runners take, in our country plagued with crime, to keep our passion for running. We are not giving up, Maria Olimpia taught us that love and passion transform ugly realities.”

“Our beloved Maria Olimpia started running 10 years ago and was very enthusiastic. She created at least two runners’ groups mainly of ladies. She encouraged many of her friends to register to the Edinburgh Half and Full Marathon and organized the trip. We will always remember her joyful and cheerful personality”.

“We are so proud to host a truly world class running event in Scotland’s capital for runners of all ages from across the globe. Congratulations to everyone who took part. Thanks for making the 2019 Edinburgh Marathon Festival one of the UK’s greatest mass participation events. Come and see us again next year!”

Runners from the Edinburgh Marathon Festival Official Charity, Macmillan Cancer Support, together with hundreds of other charities, are hoping to raise more than £5 million for worthy causes.

Entries for the 2020 Edinburgh Marathon Festival which takes place on Bank Holiday Weekend on Saturday 23rd and Sunday 24th May 2020 are open with an early bird discount for everyone who registers before midnight on Sunday 9th June at www.edinburghmarathon.com