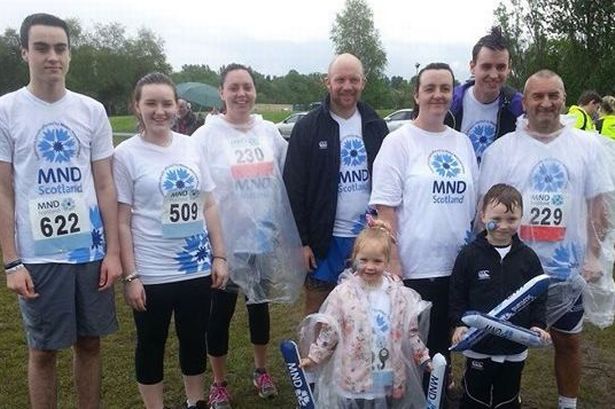 Gavin Thomson is running the four races in memory of his aunt who passed away from Motor Neurone Disease in December 2013.

A Darvel man is gearing up to run four races at the Edinburgh Marathon Festival later this year. And he needs your help to spur him on as he challenges the four distances for MND Scotland.

Gavin Thomson is running the four races in memory of his aunt who passed away from Motor Neurone Disease in December 2013. Now the 28-year-old, who says he was “very close” to his aunt Janette, wants to do everything he can to help families dealing with the horrible disease. Store manager Gaving told the Standard: “I was very close to my aunt. It was just me, my mum and my older sister Nicola, so Janette was more like a second mum to me than an aunt. “My family are very close knit. Janette’s four children are like brothers and sisters to me. Last year we all took part in MND Scotland’s Fun Run in Strathclyde Park. “It was a great day and we all felt like we were able to do something in memory of Janette. This time I want to push myself.”

On May 28 Gavin will take part in the 5km and 10km disciplines before taking a short rest and running the half and full marathon the next day. So much for a lazy Sunday. MND is a terminal illness which stops signals from the brain reaching the muscles, which can cause someone to lose the ability to walk, eat, speak and breathe unaided. Gavin’s aunt, from Kilmarnock, lost her battle with MND at 58, just 14 months after she was first diagnosed. “When she was diagnosed in October 2012 her condition progressed rapidly and by the following March she was wheelchair bound,” brave Gavin added. “She had arthritis in her hands, so when her leg started giving her trouble she assumed it was the arthritis, and it took her a while to get it checked out. “Towards the end Janette lost her voice and MND Scotland was a huge help.

The charity loaned her their eye gaze equipment to help her communicate. “She would use her eyes to select letter on an on-screen keyboard and the computer would then read out what she had written. This really helped her stay connected to her family and friends right up until the end.” Money raised goes towards helping the charity continue to support people affected by the disease, as well as fund research into this devastating illness. Iain McWhirter, head of fundraising and volunteering at MND Scotland, said Gavin’s efforts were “really appreciated”. He added: “We provide support for people across Scotland who are living with MND, and their families. “Our services include one-to-one counselling, benefits advice, complementary therapy and our communications equipment loan service.”

A bi-monthly support group is held at the Gailes Hotel, Irvine, with the next meeting on May 11 at 12.30pm For more, contact Dawn Hamilton on 0141 332 3903 or email [email protected] Of his challenge, Gavin said: “Sunday will be a challenge because I have to complete the half marathon in 1.5 hours to make it back in time for the start of the full marathon. “Training has been going well so I’m really looking forward to it.”

You can donate to Gavin’s JustGiving page here: www.justgiving.com/G-Thomson