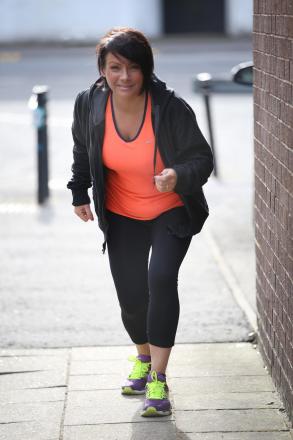 A COLLEGE worker is going the extra mile in memory of a dear friend who died of cancer.

Corinne Forrester is gearing up for the Edinburgh Marathon in May to raise funds for Macmillan Cancer Support.

The 46-year-old was inspired to undertake the challenge after losing her pal Allan Keen, to bowel cancer four years ago.

Corinne said: “This is a follow on from the last time I did the marathon two years ago and raised £2,500 for Bowel Cancer UK.

“Macmillan nurses looked after Allan in his final days and they do such a fantastic job.”

Corinne is an extended learning support advisor at West College Scotland and lives in Inverkip with her husband Darren and their 13-year-old son Lewis.

Both her husband and Allan were Regmental Sergeant Majors in the army.

She said: “Darren was a career soldier and Allan was in the army too. He was 51 when he died.

“I think the race is a good way to raise awareness.

“Allan was just 48 when he was diagnosed. I don’t think people should need to wait until the age of 50 before they are screened for bowel cancer. People should be screened earlier without a doubt.”

Corinne has always been a runner but Allan’s story inspired her to complete her first marathon in Edinburgh in 2014.
She said: “It was a fantastic sense of achievement, although I had very sore legs.

“I was just in awe of everyone who donated to the charity. They say, ‘You’re the one who is running the race’ – but if it wasn’t for people’s generosity, we wouldn’t be able to raise that kind of money.”

Corinne is also holding a ladies’ night at Inverkip Church Hall on May 6. This will include a disco, karaoke and games, with all proceeds going to the charity.

She is taking part in the race on May 26. Anyone who wants to make a donation should visit www.justgiving.com/fundraising/corinne-forrester14