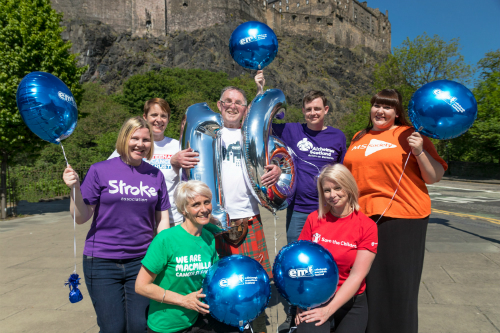 RUNNERS can star in Scotland’s most spectacular sporting year by signing up for the Edinburgh Marathon Festival 2018.

Entries are now open for Scotland’s largest running event which turns Sweet 16 on Saturday May 26 and Sunday May 27 2018, with early birds snapping up a discount and the chance to book a 2018 place at this year’s prices. The festival, which is expected to attract more than 30,000 runners, will kick off an extraordinary year of sport including the Commonwealth Games in the Gold Coast in April, the British Open in Carnoustie in July and the European Championships in Glasgow in August.

“The earlier you sign up the better, both to guarantee a place and set aside plenty of time to work out a sound training programme so you’re in peak condition on the big day. There really couldn’t be a better time to plan a trip to Scotland.”

With its fast and flat route, the Edinburgh Marathon Festival is one of the fastest in the world and a perfect choice for runners chasing a personal best. The Edinburgh Marathon joined the world’s elite road races in 2012 by becoming the first race in Scotland to be officially recognised by the IAAF, the athletics governing body. The IAAF bronze label puts the race among the top 75 in the world making it a pivotal part of the sporting calendar for runners.

The Edinburgh Marathon Festival has had an economic impact of more than £30 million for Scotland’s capital and has helped raise more than £75 million for hundreds of charities. Together with the Edinburgh Marathon Festival’s Official charity, Macmillan Cancer Support, organisers are hoping to break all previous records and raise even more in 2018, which sees 5 BRAND NEW Premier Affiliate charities on board including Teenage Cancer Trust, Stroke Association, Save the Children, MS Society and Alzheimer Scotland.

“I was completely and utterly blown away by the sheer size and impact of the Edinburgh Marathon Festival in my role as the Official Starter this year. It’s a fantastic event which raises an incredible amount of money for so many worthy causes.” said Donald.

Second only to London in terms of size in the UK, the Edinburgh Marathon Festival, which turns Sweet 16 next year, takes place in Scotland’s capital city Edinburgh and continues through East Lothian. There are nine races on offer, guaranteeing there is something for everyone from the seasoned runner to the charity fundraiser and beginners. The fun kicks off on Saturday May 26 at Holyrood Park with a 10k, 5K and two junior races. On Sunday May 27, the Edinburgh marathon, half marathon and team relay starts from the heart of Edinburgh and continues through East Lothian offering stunning views and an unforgettable running experience.

Entries are open for the Edinburgh Marathon Festival on May 26 and 27, 2018, with discounted early bird entries available until Sunday 11 June. More information is available via the website at www.edinburghmarathon.com.