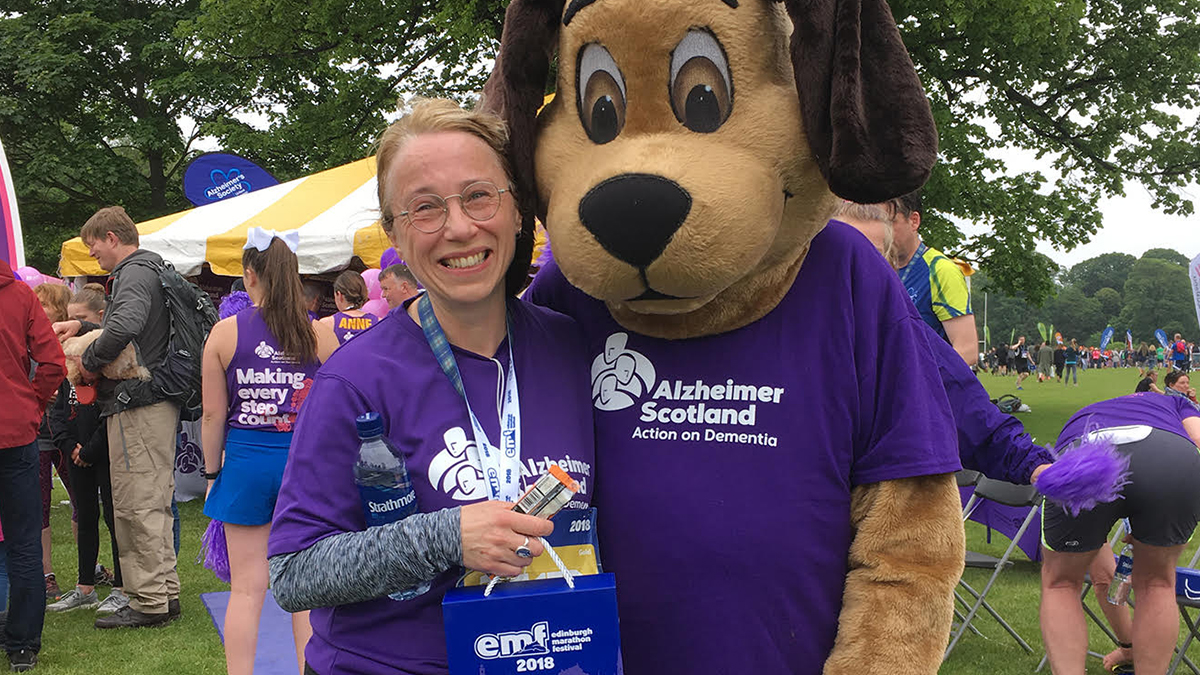 WOMAN INSPIRED TO RUN FOR ALZHEIMER SCOTLAND IN FATHER’S MEMORY

Ursula Hunter, 47 from Edinburgh, ran the Edinburgh Half Marathon in 2018 for Alzheimer Scotland.

She was inspired to fundraise for the charity after receiving the devastating news her Father was diagnosed with terminal Alzheimer’s and Vascular Dementia in January 2018, aged 71.

Whilst admitted to The Queen Elizabeth Hospital in Glasgow for tests for memory loss, Ursula’s Father suffered a serious seizure. Afterwards, he was left stripped of every day abilities he once had – including walking and many of his cognitive skills.

“He was unable to walk or feed himself. His speech did come back but he couldn’t understand what was going on around him anymore” Ursula explained.

“I felt like I had already lost my father, the man that I knew was hardly there anymore, just a flicker… perhaps only for a few moments when I visited”.

“He had been so inspirational, a hard-working artist with an academic mind, a great reader, thinker and teacher, who had a wonderful spirit and a creative mind. I couldn’t understand how this learned knowledge and bright personality could all go so quickly”.

After her Father’s death, Ursula wanted to do something meaningful that could help change the lives of people suffering from Alzheimer’s and Dementia.

“I think as a society we need to spread awareness about Dementia, to show just how debilitating it is and how it can happen to anyone and not only when we are elderly, people in their 50’s have been diagnosed with it. If only more research could be done to help people with early onset Alzheimer’s, to find ways to slow the progression of this terrible illness”.

Alzheimer Scotland is the leading dementia organisation in Scotland, campaigning for the rights of people with dementia and their families as well as providing an extensive range of innovative and personalised support services.

By deciding to take on the Edinburgh Half Marathon in memory of her dad, Ursula raised over an incredible £1000 for Alzheimer Scotland.

“It was a great experience and such a sense of achievement! I’ve learned how much can be achieved when you put your mind to it. Especially when you are inspired by the memory of a loved one or a respected person in your community”.

Second only to London in terms of size in the UK, the Edinburgh Marathon Festival has nine races on offer, guaranteeing there is something for everyone from the seasoned runner to children just starting out on their running journey. The fun kicks off on Saturday 25th May at Holyrood Park with a 10K, 5K and four junior races. On Sunday 26th May the Edinburgh Marathon, Edinburgh Half Marathon and Team Relay start from the heart of Edinburgh City as runners embark on new city centre route launched in 2018.